The 2020 State of App Services: The DevOps Divide

There is power in names, or so we've been taught by myths, legends, and Saturday morning cartoons. Shakespeare might choose to disagree, but every heroic tale gives iconic names to its hero or heroine.

So, when we name something, such as DevOps, we are attributing to it certain characteristics. Those characteristics are unique to practitioners. While certainly this growing group of professionals derives some attributes from its origination as development-focused operations, the combination of preferences for tools, methodologies, and their day to day workstreams make them unique. They are neither developers nor operators.

The respondent base in our State of App Services is always mixed, but weighted toward traditional operational roles in IT: network, security, and system operations. But we are seeing steadily increasing numbers of developers and those who identify as DevOps or Site Reliability Engineers (SRE). Given their unique and increasingly important role in digital transformation efforts, we dove into the data with an eye toward the attitudes, impressions, and preferences of those who practice DevOps.

But before you dive in, we wanted to reiterate that DevOps is unique. If you think they're just developers who write scripts and manage CI/CD pipelines, you'd be wrong. If you thought they were just operations who focus on the development pipeline, you'd also be wrong.

What we've found in the data are unique viewpoints and perspectives on technology—from app services to tools to deficits in security skills, these three groups of professionals have different opinions.

Tools are an integral part of all three groups today, owing to the emphasis placed on automation and orchestration across all domains. While all three groups use a significant number of tools, preferences emerge when we look at usage based on self-identified role.

For example, DevOps are more likely than either ops or developers to use Ansible, by wide margins. They are also slightly more likely to employ custom scripts (usually Python) and prefer GitLab over their developer counterparts’ preference for GitHub.

We also see distinct differences in the preferences each group has for app services. It is true that ops maintain primary responsibility for deploying and operating app services—both in the public cloud and on-premises. Developers have little operational responsibility, but DevOps is gaining as container-native app services grow along with the apps they support. That's important when you look at the characteristics they prefer when deploying app services—regardless of location. 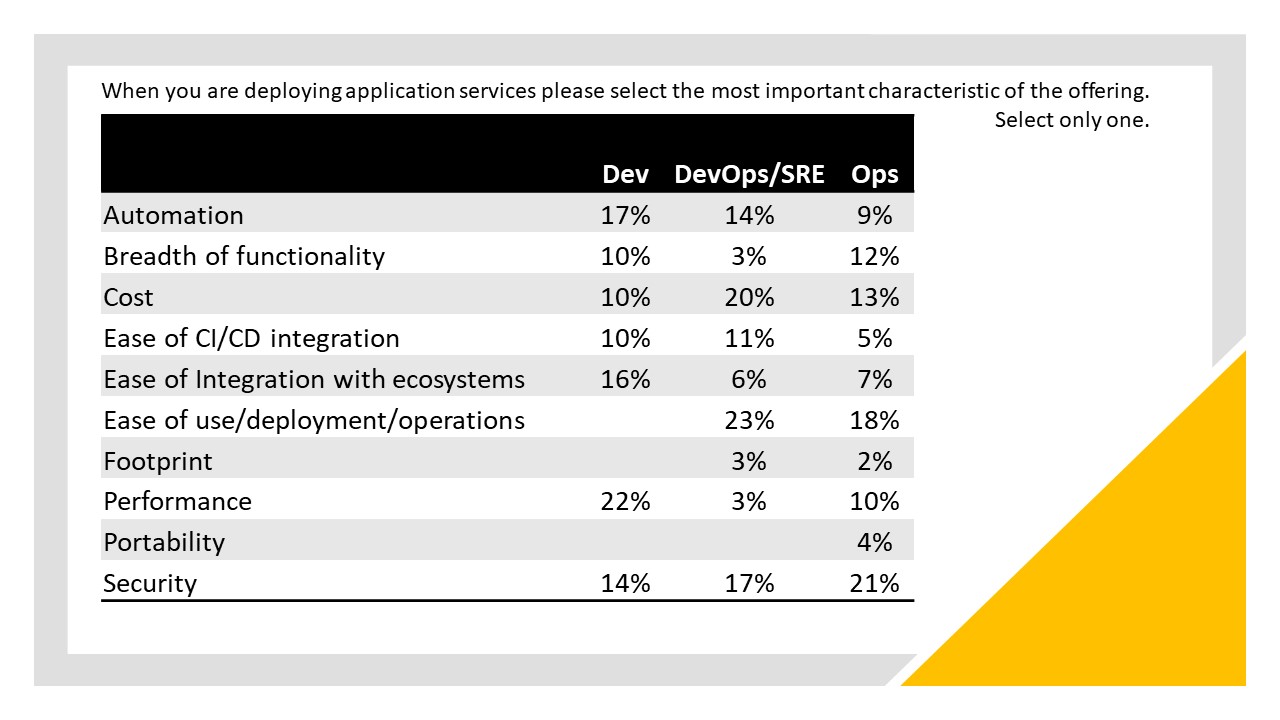 Developers, as has been the case for years, are primarily focused on performance. Interestingly, they agree with ops on breadth of functionality such as a robust set of load balancing options. But DevOps cares little for that, instead opting for ease of use/deployment/operation and cost. Developers, whose primary interaction with app services is likely to be with container-native options, are far more concerned with the ease of integration into the ecosystems in which such apps and app services are deployed and operate.

The takeaway here is to not lump together these three distinct groups of professionals. Each has its own set of tool preferences, challenges, and requirements for the app services they deploy and operate.

With that in mind, I encourage you to dig into the State of App Services 2020 DevOps edition for more insights and analysis of those who practice DevOps across the globe.