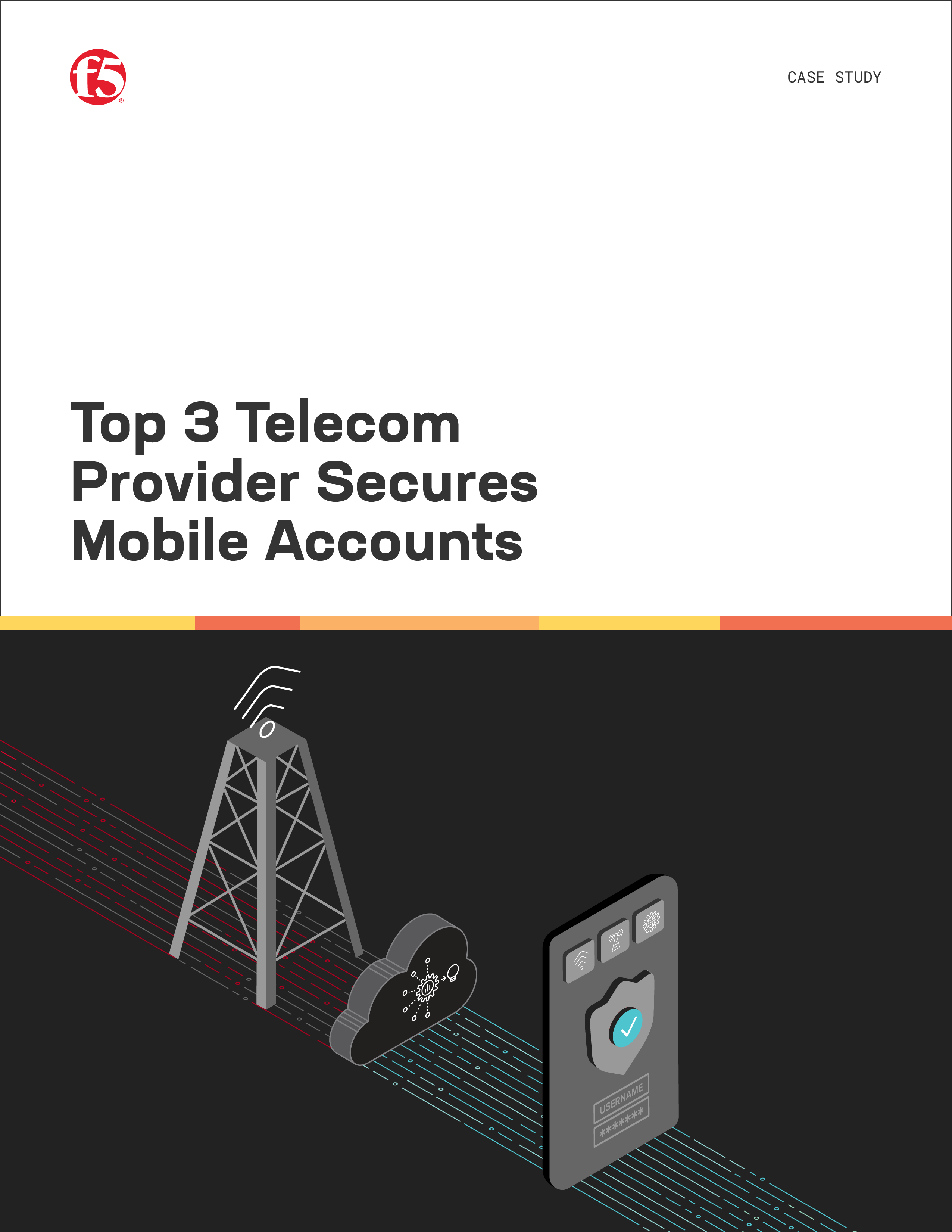 Top 3 US telecom provider that earns over $40 billion in annual revenue and serves nearly 100 million customers.

Credential stuffing is an attack in which bad actors test credentials that have been stolen from third parties en masse on a different login application. Because users reuse passwords across online services, 0.1%–2% of a stolen credential list will typically be valid on a target site, allowing the attacker to hijack the user’s account.

Attackers typically use automation to conduct credential stuffing at scale. Once attackers validate credentials on a login application, they take over the customer’s account to commit fraud.

Over 2 billion credentials were reported spilled in 2017, so attackers always have fresh credentials to test out on telecom providers. Based on customer data, F5 estimates that the U.S. telecom industry faces nearly ​50 million credential stuffing attempts per day.

After hijacking accounts, attackers take advantage of free and discounted upgrades for which the victim is eligible. Upon ordering the mobile device, the attacker will either direct it towards a shipping address they control or choose a “pick-up in store” option. If choosing the latter, attackers will have a mule visit the store to pick up the device and then resell on third-party marketplaces such as eBay or Craigslist.

Upon taking over a telecom account, the attacker will call customer service, impersonate the victim, and ask for a new SIM card to be associated with the phone number. The attacker will then be able to intercept any code sent via SMS for two-factor authentication purposes.

Consumers are significantly more likely to answer a phone call originating from their own area code. After taking over accounts, fraudsters would use the telecom provider’s virtual calling feature to place calls to all people that had similar phone numbers, thereby increasing the success rate of their telephone scam.

When account takeovers became so common that the telecom provider received negative press about the situation, the company knew it needed to find a solution immediately. Because F5 was the only vendor that could comprehensively stop credential stuffing, the choice was clear. Due to the relative urgency of the problem, the telecom provider chose to deploy F5 Distributed Cloud Bot Defense on not only its web login, but also its password recovery and account creation applications.*

During the first week of deployment, Distributed Cloud Bot Defense detected that 94% of all traffic on the login application, or nearly 65 million posts, was automated. Of that, over 50 million requests were credential stuffing attacks, all of which the service could prevent from reaching the origin server.

Distributed Cloud Bot Defense was also able to shed light on to the other types of automated traffic the telecom provider was receiving. For example, the service identified over 100,000 POSTs that were coming from the financial aggregator Mint.

Financial aggregators like Mint operate as web scrapers. They ask for clients’ real credentials to their financial accounts, login on their behalf continually, scrape financial data, and present the data in their own app. Mint, in particular, provides an automated bill-paying function which some of the telecom provider’s customers use, hence the steady POSTs. The telecom provider was pleased that Distributed Cloud Bot Defense had identified this previously unknown source of traffic, as it could now observe and manage aggregator traffic.

Attackers will always take the path of least resistance in order to optimize their ROI. Thus, the vast majority of credential stuffing attackers move on to easier targets once a defense becomes too difficult to penetrate. Many of F5’s customers observe that, within the first weeks or months of Distributed Cloud Bot Defense actively mitigating attacks on web​ applications, the attackers move over to targeting their mobile app.