Geng Lin is Executive Vice President and Chief Technology Officer at F5 Networks. He is responsible for leading technology strategy, product evolution, and critical innovations for the company.

Lin joined F5 in 2019 from J.P. Morgan Chase, where he was Managing Director, Chief Development Officer and Head of Engineering for consumer and community banking. Prior to JPMC, Lin worked at Google as CTO of Corporate Networks and later as Head of Service Engineering for Next Billion Users. Previously, he served as CTO of Networking Group at Dell and CTO of IBM Alliance at Cisco Systems. He was also an appointed Fellow at Dell and Distinguished Engineer at JPMC.

Lin is an industry-leading expert in distributed systems, software defined infrastructure, and cloud services. He is a contributing author of two books on cloud and data-intensive computing. He has published many technical papers and holds nine U.S. patents. 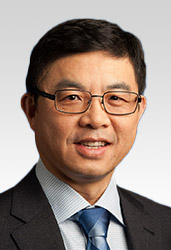