Are you ignoring the mobile app explosion inside your business?

But that’s only half the story. The other half is only visible from inside the business; from a business operations perspective. From this point of view, apps are productivity. Apps are about saving – rather than making – money.

These business ops apps are the ones in need of the corporate “app stores” research firm Gartner predicted a quarter of enterprises will have in place by 2017. Not just the mobile app interfaces offered for SaaS applications like Salesforce and Concur. These are the apps that are developed in house;  tailored to automate business processes and eliminate the inefficiency of existing manual processes.

These are the apps that are growing at a considerable pace. The Canvas 2015 surveyshows most organizations used at least 1-5 mobile business apps in 2014 and an impressive 20% used more than 10. But more interesting than that are the cost savings organizations claim to be enjoying as they convert manual processes to mobile apps.

These are surveys. Inventories. Checklists. Guided processes. Inspections. Work orders. Less than glamorous when compared to the professionally designed, graphic-laden apps offered by game developers, but critical nonetheless. These apps are the apps that not only get business done, but get it done efficiently.

The Canvas survey found that of those organizations tracking their cost savings “17% saved between $25,000-$100,000 annually switching to mobile apps, while 81% indicated cost savings between $1,000-$25,000.”  The caveat, of course, is that the survey focused on “company sizes and industries that have historically relied heavily on paper forms and manual processes.”

But don’t let that fool you into thinking the survey is less valuable. The industries turn out to be quite diverse: construction and contracting, field services, retail and distribution, healthcare, manufacturing, and government, and transportation & logistics. 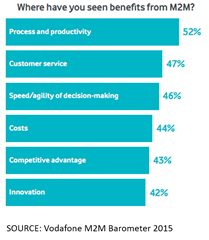 Relevant, to be sure, and indicative of the growing criticality of mobile applications to all business types, particularly those with a need to improve the efficacy of business processes.

Productivity isn’t just about e-mail and document sharing and presentations. It’s about how efficient an employee performs a given task; a business process. Which is why those business processes that can be enhanced through the use of technology are being enhanced by moving from paper to pixels and contributing as much to the mobile app explosion as are consumer facing apps.

And if you think about it for a moment, you’ll see where the Internet of Things is going to intersect with mobile business apps and cause even more of an explosive impact on cost savings – and on the infrastructure and services you’re going to need to manage access, security and delivery of those applications. Mobile phones are quite frequently the “hitching post” in a tethered relationship with an IoT device and the mobility of a phone or tablet makes it a perfect companion for interacting with the various “things” organizations are and will be using internally to manage business.

Consider the findings from Vodafone’s M2M Barometer 2015 regarding the benefits organizations are realizing from M2M and the Internet of Things. “Process and productivity” top the list with 52% of organizations.  That’s no coincidence, that’s because the intersection of M2M and mobility is business process, which translates directly to productivity.

So if you weren’t paying attention (not you, I’m sure you were) don’t ignore the criticality of mobile apps inside your business. It’s just as imperative to pay attention to the security,performance, and availability of apps facing inwards, toward business operations, as it is those facing outward, toward the customer.  Because if you think downtime or slow apps impacts profits, think about how much it will impact productivity and process when it’s all relying on things and mobile apps.