Are Your Apps Stressing Out Users with Poor Performance? 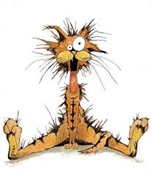 A recent survey finds 27% of users claim poor performance is not only frustrating, but it stresses them out.

Years ago, the comedian Louis CK offered up what is now a classic lament (for some of us, anyway), which has been dubbed, “Everything is Amazing and Nobody is Happy.” If you’ve seen it, bear with me for those who haven’t. In it, Louis watches those around him become frustrated with using technology in an airplane, and points out the amusing reality of our impatience with slow WiFi onboard while flying through the air – an amazing feat of engineering in the first place.

The lament is one that perhaps those of us who cut our teeth on dial-up and inordinately slow web pages can understand. It is fascinating to watch ‘digital natives’ contort their faces with anguish when an app or web page takes more than the blink of an eye (about 400ms) to load. Perhaps the patience of we, uh, more experienced users stems from suffering through multi-hour long downloads of Red Hat slackware that tied up our phone-lines and computers only to be corrupted five minutes from completion by digital garbage injected by call-waiting thanks to yet another urgent telemarketing call.

Youngins today have no idea how good they have it. The Internet (and technology in general) is actually amazing. And yet nobody is happy. It turns out they’re not only not happy, they are stressed out.

But we can’t go back (and honestly, who really wants to?) so all we can do is deal with the world as it is, not as it was or we’d like it to be. And that means users that are increasingly sensitive to variations in performance.

Thus, when a report like that from AppDynamics arrives detailing the devastating impact of poor performance, we ought to pay attention. Because poor performance is a serious issue that can dramatically impact your ability to enjoy a piece of the global app economy, now estimated to surpass $6 trillion in 2021. 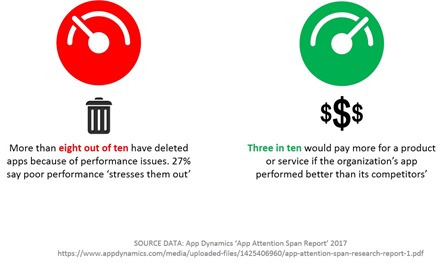 The potential impact is not trivial. On the contrary, it turns out today’s users are more loyal to an app than they are a brand. One might then conclude that in the app economy, your app is your brand, for better or worse.

Worse, it turns out, is worser than you might expect. Poor performance not only frustrates users, it stresses them out.

Given that many of us rely on apps – both mobile and otherwise – to perform a hundred different tasks during a typical day at work, this isn’t just about your external facing apps, either. It’s about both those apps designed for profit and productivity.

The truth is that in the digital economy, apps are opportunity to grow the corporate domestic product (CDP) with improved productivity and increased profits through convenience. But poor performance can bring that growth to a screeching halt.

When 8 of ten users have DELETED an app because of performance issues, you have lost an opportunity. The sad reality is that, based on this report, they’ve probably already gone to a competitor.

The good news is that there are a variety of app services designed to improve performance. And organizations are using them.

THE APP SERVICES ORGS USE TO IMPROVE PERFORMANCE

The problem is, of course, that you don’t always (rarely, in fact) have complete control over the performance of your app. There’s the last mile – that sinuous stretch of cable between you and the user. There’s the app platform, itself, which may or may not already be tweaked and tuned as much as it can be. If it’s in the public cloud, you have no control over the network, itself. And then there’s the app. Language choice, database connectivity, logic. The factors that contribute to poor performance are voluminous, and not always under anyone’s control. App services, which sit upstream in the data path, are able to provide an excellent counterweight to those issues bogging down app performance and, in many cases, give it a leg up to perform better than you might have hoped.

Techniques like compression and acceleration (minification, image optimization, etc..) improve performance by manipulating content to deliver it faster – inside the organization and out. Protocol-focused services like HTTP2 and “fast HTTP” focus on eliminating those pesky aspects of text-based protocols that get in the way of delivering apps faster. While HTTP2 usage remains sluggish, we found in our State of Application Delivery 2017 survey that a significant percentage of organizations (16%) planned on deploying HTTP2. Other performance related services fared well, vying with security-related performances for the title of “most likely to be deployed in the next year.”

SSL offload and TCP multiplexing means servers focus on serving content, not performing cryptographic and connection-related acrobatics on every request and response, an increasingly burdensome task when serving up apps constructed from hundreds of API calls.

App services provide a robust set of options for improving the performance of apps, in the cloud or in the data center. Their focus is purely on how to make apps go faster, regardless of their location or construction.

Performance has always been important, but it’s never been quite as critical as its becoming in the app economy. With a lower tolerance for poor performance (one might even suggest users are highly sensitive to jitter these days) it is more important than ever to take advantage of all the tricks in your toolbox to make sure your app goes fast enough to satisfy even the most demanding of users.

If you need a test subject for that, I’ll rent you my 9 year old. If you can satisfy his twitchy app finger, you’ve got a winner.