At VMworld 2019 in San Francisco this week, F5 decided to poll attendees at its booth to find out what their most formidable challenges were in their jobs. With IT undergoing a dramatic change over the past few years, F5 wanted to get a snapshot on the most formidable issues VMworld attendees are facing. The polling was done in the F5 booth over the four days that the show's exhibit areas were open.

Before getting into the results of the polling, it needs to be noted who we polled and what were the ‘formidable challenges’ choices that users had to pick from. The personas/roles that participated were:

Each attendee who agreed to do the poll were given instructions to use the colored (red, yellow, orange, and blue) rubber Lego-style bricks to cast their votes into clear plastic bins. The ‘formidable challenges’ choices they voted on were: 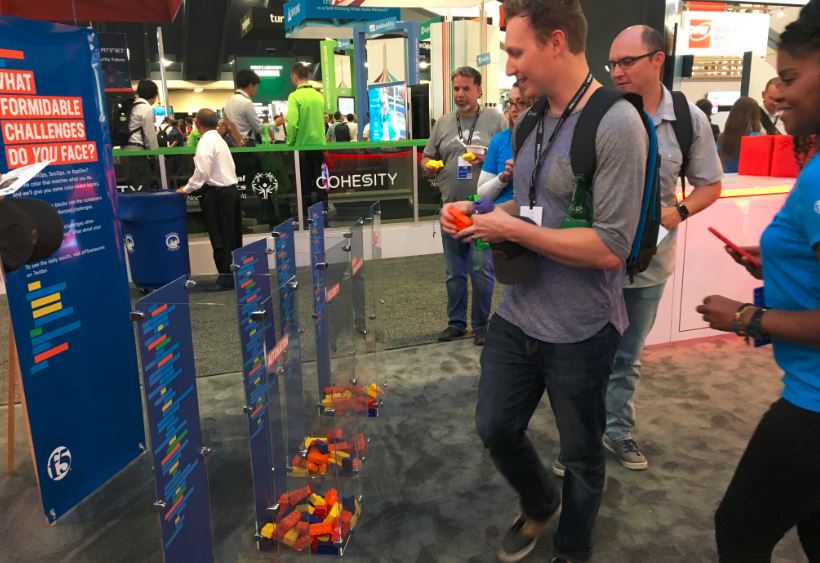 Now that we know the personas and the challenges they had to vote on, below is a breakown of the personas who came through the F5 booth and participated in the polling:

It is a bit surprising to see a higher count for DevOps vs. NetOps and SecOps coming through the F5 booth, but it’s probably a reflection of the changing IT landscape.

Now to the polling results. Each day we totaled up the results of the 4 ‘challenges,’ with the overall rankings as follows:

Security was consistently the number one choice overall amongst all groups at 34.26%. The high vote count by DevOps indicates that incorporating security into the application development and delivery process remains problematic.

Automation was the consistently second choice overall amongst NetOps, SecOps, and DevOps, and not that much less than security. Given the previously mentioned challenges with Security by DevOps, it makes sense that SecOps and NetOps reciprocate with votes around automation. The results portend a conflict over how automation can be implemented, when and by whom. Given that automation is a staple of App developers it makes sense they don’t view it as a problem.

Siloed Functions finished a much-lower third in our polling. However, interestingly it did come up in a good number of in-person conversations with attendees. “Verbal jabs” and “finger-pointing” typically arose from multiple groups of attendees who worked together within larger IT organizations. This age-old problem that doesn’t seem go away with technological evolutions, especially for larger organizations.

So, in summary, VMworld attendees to F5’s booth told us that security and automation are their biggest challenges. How does this stack ranking apply to your environment--are you seeing the same things at your organization?

Hundreds of attendees took their time in making their choices, and F5 extends a big Thank You! to them for participating in the polling and the useful conversations that came out of this exercise. For more information on the benefits of deploying F5 and VMware technologies together, please visit: https://www.f5.com/partners/technology-alliances/vmware